VANCOUVER, BC – July 20, 2021 – INCA ONE GOLD CORP. (TSXV:INCA) (OTCQB:INCAF) (FSE:SU92) (“Inca One” or the “Company”) a gold producer, operating two, fully permitted, mineral processing facilities in Peru, is pleased to report it has recorded another record month of production for the month of June 2021.

Following up on the prior month of May’s record deliveries and production, the Company has just recorded another best-ever month as it processed 5,183 tonnes of gold-bearing material during June 2021. This represents a 46% increase over the prior month of May and a 37% increase over the previous best-ever June total (3,774 tonnes processed in June 2019). Additionally, this marks the Company’s highest level of processing since December 2019 (5,177 tonnes). In this past month of June, the Company processed an average of 173 tonnes per day (“TPD”).

Now halfway through the year, the Company is pursuing additional working capital to increase its ore purchases in what are historically the highest production months of August to December.

To highlight the results discussed above, the following table lays out the last four months of processing, since receiving the Gold Prepayment Facility (please see March 16, 2021, press release) from OCIM Precious Metals: 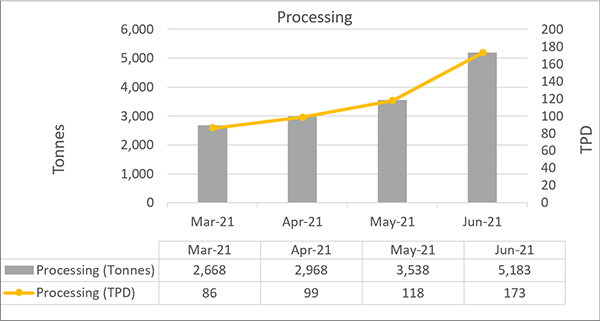 “As we have previously reported, our production tends to lag ore supply and the production results from this past month of June are a direct result of our record deliveries in during May,” stated Edward Kelly, President, and CEO of Inca One. “We have demonstrated once again that higher levels of working capital directly leads to increased processing rates which fuel production growth and positive cash flow.”

Inca One Gold Corp is a TSXV listed, gold producer operating two, fully permitted, gold mineral processing facilities in Peru. The Company has produced more than 92,000 ounces of gold, generating over US$125 million in revenue from its first six years of operations. Inca One is led by an experienced and capable management team that has established the Company as a trusted leader in servicing government permitted, small-scale miners in Peru. Peru is the world’s seventh-largest producer of gold, and its small-scale mining sector is estimated by government officials to be valued in the billions of dollars annually. Inca One possesses a combined 450 tonnes per day permitted operating capacity at its two fully integrated plants, Chala One and Kori One. To learn more visit www.incaone.com.

On behalf of the Board,

Statements regarding the Company which are not historical facts are "forward-looking statements" that involve risks and uncertainties. Such information can generally be identified by the use of forwarding-looking wording such as "may", "expect", "estimate", "anticipate", "intend", "believe" and "continue" or the negative thereof or similar variations. Since forward-looking statements address future events and conditions, by their very nature, they involve inherent risks and uncertainties. Actual results in each case could differ materially from those currently anticipated in such statements due to factors such as: (i) fluctuation of mineral prices; (ii) a change in market conditions; and (iii) the fact that future operational results may not be accurately predicted based on this limited information to date. Except as required by law, the Company does not intend to update any changes to such statements. Inca One believes the expectations reflected in those forward-looking statements are reasonable, but no assurance can be given that these expectations will prove to be correct and such forward-looking statements included herein should not be unduly relied upon.

This press release shall not constitute an offer to sell or the solicitation of an offer to buy, nor shall there be any sale of these securities in any state in which such offer, solicitation, or sale would be unlawful prior to registration or qualification under the securities laws of any such state.